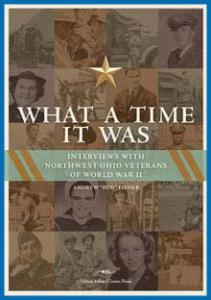 What A Time It Was

$24.9524.95
Army veteran Andrew Fisher has compiled and edited a book based on some of the Veterans' History Project interviews that are archived in the Ward M. Canaday Center of the University ...

Army veteran Andrew Fisher has compiled and edited a book based on some of the Veterans' History Project interviews that are archived in the Ward M. Canaday Center of the University of Toledo's Carlson Library. Titled What a Time It Was: Interviews with Northwest Ohio Veterans of World War II, the book is a selection of 80 interviews from among the hundreds in the archived collection. As a volunteer for the local Veterans' History Project effort, Mr. Fisher interviewed over 500 veterans in northwest Ohio and southeast Michigan. In 2005, he was one of 12 of the most prolific volunteers in the nation who were invited to Washington, DC to be honored by the Library of Congress. The book includes interviews with men and women of all the service branches, both theaters of operation, and the home front. There is an appendix listing and profiling all of the VHP interviewees whose recordings are housed in the Canaday Center as of October 2009.

Title: What A Time It Was

Article:
"Band of brothers and sisters share WWII experiences in new book"
by Cynthia Nowak at the UT News archive.

Drawing on his collection of more than five hundred oral history interviews, Andrew Fisher spotlights a selection of eighty of the often dramatic and sometimes painful stories of World War II veterans from Northwest Ohio. The majority of the excerpts are grouped according to the veteran’s service in one of the major theaters of war, European or Pacific, with three additional interviews from “The Home Front” and a few more under the heading of “Other Military Personnel.”

U.S. Army and Air Force veterans make up the largest groups of narrators, though a few Navy and Marine veterans are also included, as well as a sampling of Coast Guardsmen, prisoners of war, nurses, a war correspondent, an Army chaplain, two merchant mariners, two Rosie-the-Riveters, and a USO worker.

Fisher includes a number of surprising gems among the narratives. One of the first black Marines, Eugene Goolsby, a veteran of the Pacific, details his Jim Crow military experience. His service was restricted to non-combat duty, leading him to conclude, “I always thought that I could have done more, but we did what we were told to do” (155).

Army 1st Division veteran, Claude C. Woodring, who landed at Omaha Beach on June 6, 1944, summarizes the eight to ten hour inferno he encountered on the beach and the stiff fighting during the advance inland laconically as “no walk in the park.” Asked for any words of wisdom he might wish to pass on, Woodring responded at greater length with specific advice. “[If] you have to go to war, get in the Navy or the Air Force so you don’t have to sleep in the dirt and you will have plenty of food. The worst part of the war was that I was always hungry, always dirty, and always tired” (112).

It is possible to open What A Time It Was at any point and enjoy the interviews on their individual, often quite compelling, merits. Fisher has not tried to fit the interviews into a central narrative, though a simple structure conforming to the war’s chronology might have been helpful to some readers. Alternatively, additional textual annotation or a more detailed introduction might also have provided readers unfamiliar with the war with a useful context.

Oddly, rather than provide context to the selected excerpts, the editors’ introduction emphasizes the Russian war effort. The editors, apparently, felt that this was necessary because about ten of forty European theater veterans make passing reference to the German people’s often-voiced fear of the advancing Russian soldiers. Russian soldiers were important to the overall Allied victory, but a few footnotes would have sufficed to point this out.

In any case, the material on the Russians, which omits any mention of their pro-German actions early in the war, draws attention away from the American veterans. Rather, the introductory essay should have provided context for the interviews, perhaps by discussing their lives in Northwest Ohio before the war. The oral histories contained in the volume deserve the exclusive focus of What A Time It Was.

Whether from fascination or horror, warfare compels interest, and to most people those individuals who served in that environment seem almost superhuman. The stories in Fisher’s book are memories from this most dramatic time in the lives of those interviewed, and the drama comes through in every one of the stories in the book.

In What A Time It Was, Fisher has created a popular work that will appeal most to those northwest Ohioans who knew these veterans or their families. But these voices of neighbors, friends, and family, in the ancient oral story-telling tradition, are also speaking to a larger community of their experiences, and their stories ought to appeal to anyone with an interest in the history of the American people.