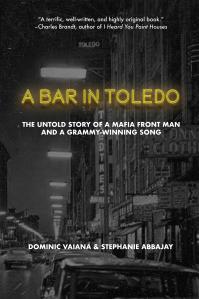 A Bar In Toledo

The fascinating story of a local man, his popular Toledo bars, and the musicians and mobsters with whom he crossed paths.

When Duane Abbajay took over his brotherís bankrupt nightclub in 1962, he promised his wife it would be a quick turnaround to protect his familyís name. Instead, he became the face of a bar that transformed Toledoís entertainment scene and inspired a Grammy-winning country songóall under the thumb of a trigger-happy mafia boss.

Informed by interviews with crime historians, bartenders, and bargoers and corroborated by FBI reports, this Rust Belt psychodrama offers a new perspective into the worlds of organized crime and the music business, which were closely entwined.

Emotional, theatrical, and dripping with nostalgia, A Bar in Toledo is a love letter to the golden age of American musicóand the dark underworld that helped make it all possible.

Title: A Bar in Toledo: The Untold Story of a Mafia Front Man and a Grammy-Winning Song

Advance Praise for A Bar In Toledo

ďThis terrific, well-written, and highly original book gives the reader, all at once, tales of the early days of rock and roll; the Midwest Mafia; and the ups and downs of immigration. It has something for everyone in abundance.Ē ó Charles Brandt, #1 New York Times bestselling author of I Heard You Paint Houses, inspiration for the Netflix film The Irishman

ďThis book crackles from the first page. Vaiana and Abbajay imbed a great mob story within a riveting narrative that chronicles the duty of family, the emerging rock and roll music revolution, and ethnic assimilation in Midwestern America in the mid 20th Century. Take the ride with their vivid wordsmanship and you wonít be disappointed.Ē ó Scott M. Burnstein, organized crime historian and bestselling true-crime author

Dominic Vaiana is a writer, ghostwriter, and marketer. He has created content for brands including Spotify, Rťmy Cointreau, Intuit, and Mastercard. He lives in St. Louis, Missouri. Find him at dominicv.net

Stephanie Abbajay is the co-owner and managing partner of David Stine Furniture. She is also a writer and editor. She has written dozens of articles and essays and has ghostwritten five books. She lives in Dow, Illinois, just outside St. Louis. Find her at stephanieabbajay.com