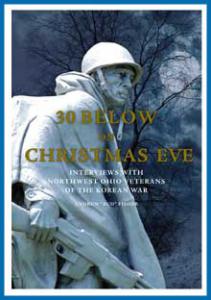 30 Below on Christmas Eve

$24.9524.95
The companion book to "What a Time It Was." Army veteran Andrew Fisher has returned to share the experience of those locals who served in the Korean War.

Andrew Fisher returns to the University of Toledo Press to publish another series of interviews with local war veterans. This time, he focuses on the Korean War. While the Korean War is often referred to as the "Forgotten War," this book will bring to life the memories and experiences of those men and women who served their country.

"I only fought in Korean on a TV sound stage - and in a dress at that - but i have great respect for the guys who were actually there. These interviews tell it all . . . from suffering with frostbitten feet to charging up Heartbreak Hill, from being tortured as POWs to being flown in to MASH units. Thirty Below on Christmas Eve shows the 'real' Korean War and the real valor our boy brought to the fight - and then some!" ~ Jamie Farr

This book includes a foreword by Howard McCord.

Title: 30 Below on Christmas Eve

"About Books: Recollections of veterans paint word picture of Korean War"
by Gary Brown at the CantonRep.

Sixty-two years ago a hot war engulfed the Korean peninsula. The war started on June 25, 1950, when the North Korean People’s Army attacked across the 38th parallel and in less than sixty days pinned the surviving Republic of Korea formations and their American advisers against the rocky coast around the port city of Pusan. Following this disastrous onslaught, the war see-sawed back to the north when the United Nations counterattacked in September, and then south again when the Chinese intervened several months later. The fighting front finally stalled about where it started for the remaining two years.

In 1950, Americans knew very little about Korea, and that condition is common today. That makes the maps, timeline, and introduction very helpful. In the introduction, written with Molly Schiever, Fisher places the war in the context of the emergence of the Cold War and provides an overview of the course of the conflict.

Appendices include “Terms Used,” a glossary of acronyms, abbreviations, place-names, and other information; “Personalities,” biographical sketches of a few key players, including a horse, Sgt. Reckless, USMC, and a warship, USS Toledo; “Histories,” short essays on Korean history and statistics, on tyrants and war in the early twentieth century, on integration of the armed forces, and on wartime dissent; and a section on the Korean War Veterans Association that lists interviews held in the Ward M. Canaday Center at the University of Toledo Carlson Library.

Interviews in 30 Below are arranged according to service—Air Force, Army, and Marine Corps. Another section, “Active Reserves,” contains stories of veterans who also served in World War II. The remaining section, “Other Participants,” contains stories of service during the Korean War period, mostly in other theaters, and also introduces two Koreans who later settled in the U.S.

One of the attractions of such material is that the stories these young junior officers and enlisted men tell are of war seen from the bottom. There is no command perspective or comprehensive view of the war. No doubt Fisher would have welcomed the opportunity to interview more senior, and older, personnel, but it is worth remembering that only a few years separate even these younger men from the WWII generation, and both groups are quickly passing from the scene. Senior commanders were gone years ago.

The Korean War was not a war that American leaders had anticipated. When the Second World War ended, the United States had quickly dismantled its armed forces. A few veterans stayed in uniform, but the majority of the postwar forces stationed in Germany and Japan were draftees. Nearly all were under-trained or out of practice, and therefore poorly prepared for a war no one expected to fight. And when Cold War tensions gradually increased in the late 1940s, military strategists and politicians in Washington focused primarily on Europe.

Consequently, the U.S. was surprised by the North Korean attack and forced to throw in, sacrifice really, many unprepared American soldiers in the first weeks of war. This condition comes out repeatedly in the interviews. Leo D. Barlow’s comments are typical when the subject turns to the winter weather. Asked how he was equipped, Barlow, a Marine who landed at Inchon and fought at Chosin Reservoir, answers, “It could get down to forty degrees below zero and we didn't have the proper gear. We lost more people to the weather than to enemy action (64).

Each interview usually begins with a short biographical sketch. Editorial annotations and emendations are sparse; probably to permit for the recollections to speak for themselves, but there is a limit to how effective this tactic is. Barlow’s interview offers an example where a note would have been helpful. When asked later how long he stayed in Korea, Barlow says that he landed in Korea in September 1951 and left in June 1952 (66). However, Barlow also says that he took part in the Inchon landing (September 1950) and in the fight at Chosin (early December 1950). Barlow is more likely to have confused the dates than his participation in those events, and a note should clarify the discrepancy in the text.

A few other discrepancies of the same sort such as confusion of the F4U Corsair with the A-1 Skyraider (40) and of the not-yet-available D9 bulldozer with another model (37), show the value of the occasional note. None of these passages refer to the sort of detailed information interviewers can be expected always to have at their fingertips, but evaluation and notation after the fact in the interest of accuracy is neither disrespectful of a subject when the years might have clouded memory nor a burden meant to be imposed on the reader.

The Korean War is often viewed as a U.S. defeat. Veteran Joel C. Davis provides the best response to this characterization. Discussing his visits with schoolchildren, he points out that they often ask who won. Davis’s answer is clarifying. “When they ask whether we won the war, we answer, ‘Ask the South Koreans.’ Look at their modern capital city of Seoul, which had been leveled in 1952. Look at their economy, the fifteenth largest in the world. … And then ask if we won the war” (22).

Reading through the interviews may remind the reader of another unwelcome war—the Iraq War. It is interesting to consider how Iraq might look in sixty years when schoolchildren ask other veterans similar questions. Will something like South Korea sit astride the Tigris and Euphrates Rivers? Certainly, no one would have predicted such a future for South Korea six decades ago. The reader may also wonder at a few other contrasts, at the world’s largest concentration camp next to a vibrant free nation, or at one nation starving while the other lives well. Readers might also wonder if the North Koreans ever play the welcoming host to Chinese combat veterans. It seems unlikely.

30 Below is a fitting addition to the collection of reminiscences of a disappearing generation of Cold Warriors. We should hope that there will always be people like these men who will rise to the occasion with spirit and dedication.