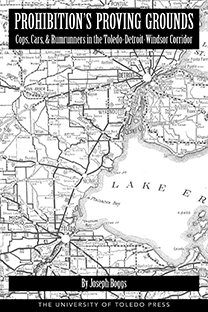 NOTE: This is a PRE-ORDER. The book will ship in December, once they arrive from the printer.

Prohibition’s Proving Grounds examines the tumultuous dry years in this trans-border region through its thriving motorcar culture. In the 1910s local automobile factories churned out affordable vehicles that put many Toledo-Detroit-Windsor corridor residents on wheels for the first time, just as a wave of prohibitionist sentiment swept the area.

Its failure can be partly attributed to controversial policing practices that angered area motorists suspected of bootlegging. Local sheriffs, troopers, and dry agents could not stem the tide of motorized professional smugglers who increasingly perpetrated brutal crimes in the region’s rural roadways and city streets.